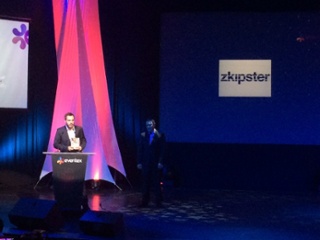 The Oscars weren’t quite the end of awards season this year — at least not for the event industry! This week, Eventex held their annual awards gala in Sofia, Bulgaria. zkipster was honored with two awards that night in the “Best Event Technology Startup” and “Best Event Mobile App” categories.

Christoph Mueller, head of operations and strategic projects, was at the gala in Bulgaria’s capital to receive the two Eventex awards for zkipster. “This is an amazing recognition for our team and product,” commented Mueller. “Last year more than 2.5 million guests checked in with zkipster. Considering that Sofia has 1.2 million residents, we checked in all of Sofia with a “plus one” last year.”

The awards ceremony was part of the Eventex Congress, which is the largest industry gathering for event and meeting professionals in Europe. The awards celebrate the best corporate events, conferences, and event technology providers worldwide. The awards were judged by a global jury of thought-leaders, event professionals, journalists, and technology experts.

And, of course, since the event was designed to wow event industry professionals, the set up didn’t disappoint. Held at the Rainbow Plaza Hotel, the ceremony had a gala dinner setup featuring an arrangement of three giant screens on stage. The pre-presentation reception featured local Bulgarian finger foods and drinks. And during the ceremony, there were performances by acrobats and fire artists between each category. Combined with the dramatic music played prior to the announcement of each winner, it was a show not to be missed.

“It’s an absolute thrill and an honor to be recognized at the International Eventex Awards,” said David Becker, co-founder of zkipster. “When we first started zkipster, we set out to be the best check-in app for non-ticketed events. We’re so happy that as we have grown and evolved, we’re now to the point of earning honors at what is essentially the Oscars for event professionals.”

Like with the Oscars, these awards raise the bar. So while 2014 was a big year for zkipster with the launch of zFace, zPrint, and zSocial. We’re taking this honor as motivation to continue to innovate. Expect to see more great things from zkipster in 2015.

Read more about the International Eventex Awards and see photos from the ceremony.