An Emmy award-winning storyteller, J.B. Miller has built a successful career on crafting stories that move people. From brand activations for Samsung to luxury blowouts for Palm Island Dubai, J.B.’s perspective on telling the right event story comes from a long pedigree of success.

“There’s never been a more exciting time to be creating experiences through events,” J.B. Miller says as he recalls what led him to open his own firm, Empire Entertainment.

“There’s this baseline of where you live your life,” explains J.B. For so much of human history, people lived to fulfill basic and immediate needs: food, shelter, family. The opportunities to live above the baseline, as he puts it, were hardly available to everyone. Enter the present, where even hyper-exclusive events are in high demand.

”Humanity is becoming addicted to spending more time above their baseline – and I’m fortunate enough to be in the business of creating above-the-baseline experiences.”

During the photo shoot for our First Impressions art project in New York this summer, J.B. shared his thoughts on how to build urgent and compelling narratives that lead to modern above-the-baseline event experiences.

Build both emotional and logical hooks into your story

Seeing a couple walk down the aisle together for the first time after tying the knot can evoke lumps in the throat and swelling emotions throughout the audience. Listening to a strategy seminar at a conference is much more likely to be intellectually stimulating than it is to tug at heartstrings. 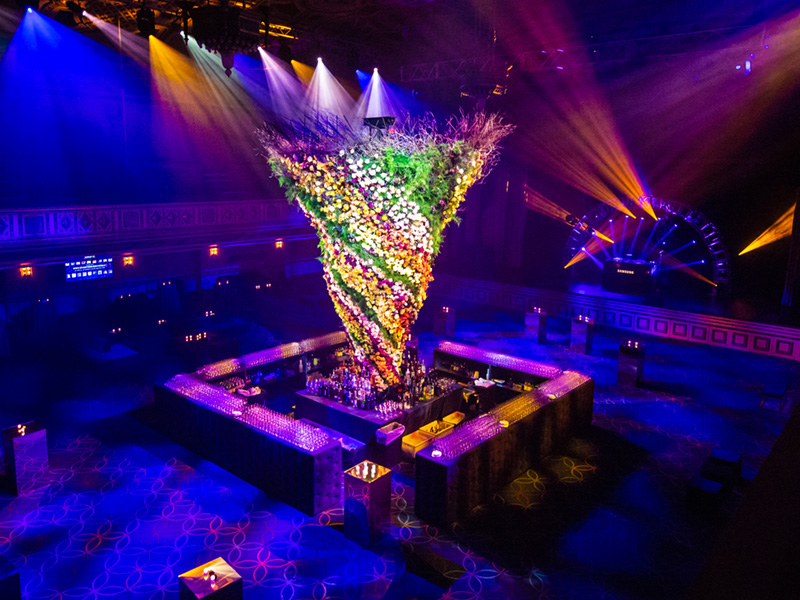 Good events tap into one side of those emotional and logical forces, and do it well. J.B. believes that great events find ways to do both, sometimes in unexpected ways.

So step one for production is developing the narrative, which is where J.B. starts his process.

“I think about two different threads,” says J.B. “One is the emotional narrative. How does it inspire you? How does it excite you? We take people down an emotional path.”

How do we build a rational argument that complements the emotional journey?

And that leads to the tie-in. “Then there’s the other part of the brain where we focus on the logical operators,” he continues. “How do we build a rational argument that complements the emotional journey?”

The two narratives coexist most successfully when they are built into touchpoints throughout the night. J.B. frames it as a discovery process, questioning each facet to see how it can be shaped into strengthening the narrative:  “What implementation choices, whether it’s food, lighting, or speakers help tell the story? That’s what you need to answer.”

Imagine finding a note hidden in the flowers with a thoughtful message tying to the event’s theme, that only you and a handful of other people discover. Helping guests uncover certain parts of the narrative on an individual level creates more of a feeling of ownership in the whole experience.

“Seeding moments of epiphany throughout a space is part of what a good producer does,” explains J.B. “Subtle discoveries are more effective than me hitting an audience over the head with a hammer to get a point across.”

Educate the audience, then let them come to the answer in their own way.

His philosophy is that the most effective approach to drive an action, whether it’s sharing content or donating to a cause, starts with being an effective teacher. “Educate the audience, then let them come to the answer in their own way.”

“We’ll show an audience why a cause is important,” he continues. “If they come to a realization on their own based on what we’ve put in front of them, they’ll feel inspired to act.”

Look at your narrative through the eyes of every guest

Regardless of the genre, great stories usually have something for everyone – a character, a particular scene, or even a quote. And the same goes for a great event.

While J.B. admits that being able to completely appeal to every single attendee is near impossible, he shoots for a goal that distills that idea: “program for the middle of the Venn diagram.” Being a “centerist” as he calls it helps hit the right notes for the majority of your guests.

We have a duty to think about the settings in which we place people.

And with that perspective comes a responsibility – “When a guest walks into an event, they are relying on us to be the custodian of their existence for that period of time.” J.B. relates the experience to that of a moviegoer. When someone sits down in a theater to see a movie, they are putting their time in the hands of that director.

With an event, the control someone hands over is even more, as they become an active participant rather than a passive viewer. “We have a duty to think about the settings in which we place people.”

“To only consider one person’s perspective is flat,” says J.B. “You can do the best event for a 26-year-old white male from New York City, but someone that recently relocated from the West Coast could be at the same event. They may have a very different experience.”

As planners thinking about narratives and hovering over an event from a birds-eye view, staying grounded with one perspective can be hard. But balancing perspectives is what it takes to make complex narratives gel for individuals. If you don’t, J.B. notes, “you’re going to miss the stuff that’s important to them.”

Want to hear more from J.B.? Listen to the full podcast with him we recorded in collaboration with GatherGeeks, and check out the rest of the First Impressions project.